« Is this normal and if so, why?
Things that are driving me insane » 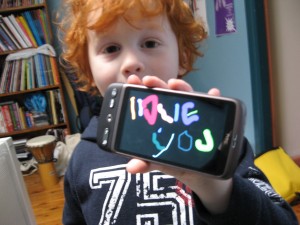 Mr4 handles the PaintPro app on kid mode with ease.

I haven’t owned a smart phone before. My husband has an iPhone, but I’ve barely touched it in the grand scheme of things, so the amount of apps available for the Desire is totally mind-blowing for me. I’m only game to install free apps so far on the Desire. I just can’t bring myself to install ones that cost actual real money, no matter who is paying for it. It’s the same mindset that stops me buying designer shoes, no matter how much I lust after them.

But I have managed to install and play with quite a few apps and games from the Market. This post is a discussion of the apps I’ve used on the Desire so far.

For me, apps fall into the following categories:

I haven’t actually been at work this week due to a sick Mr4, so this is just conjecture of work-related usefulness at this stage.

I’m no gamer, but I do enjoy the occasional game as a wind-down activity.

I’m still trying to navigate my way around the Market in order to find other apps that would be useful for us, but for now, this is what we’ve got.

This entry was posted by Helen on May 19, 2010 at 02:41, and is filed under Uncategorized. Follow any responses to this post through RSS 2.0. You can leave a response or trackback from your own site.